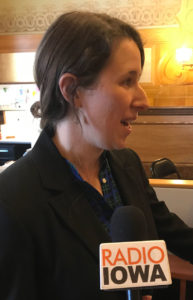 The Republicans on a special committee reviewing the challenged outcome of a northeast Iowa legislative race say a batch of uncounted ballots should remain sealed.

“We lack the legal authority to open those ballots and count them because those 29 ballots did not have an ‘intelligent bar code,’ which is required by law,” Representative Steven Holt, a Republican form Denison, told reporters earlier this afternoon.

Holt and the two other Republicans on the panel say the Winneshiek County Auditor did not pay for that tracking service and that service is the only way to determine if the ballots were mailed by the deadline. A judge in December ordered that the general bar codes sprayed on 33 unopened ballots be checked and the Postal Service determined 29 were mailed by the deadline.

Representative Mary Wolfe, a Democrat from Clinton, said Republicans should prioritize the rights of those 29 people who mailed their ballots on time.

“Obviously, we’re not seeing justice done here and for some reason, their votes aren’t going to count,” Wolfe told reporters this afternoon, “so that’s just wrong.”

Republican Michael Bergen of Dorchester was declared the winner over Democrat Kayla Koether of Decorah by nine votes in Iowa House District 55. A judge ruled last month it was up to the legislature to decide if those ballots should be opened. The “special committee” appointed to review the case will meet tomorrow afternoon. Republicans on the panel plan to pass their recommendation that the votes not be counted.

The full House is likely to vote on the matter soon and another court appeal is likely.