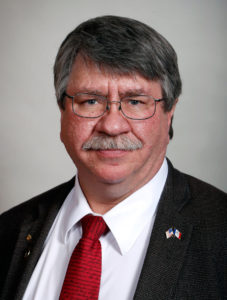 Four Republicans in the Iowa House are sponsoring legislation to erect what they describe as an “abortion victims monument” on the state capitol grounds.

“I saw a news article about a similar bill in Tennessee, where they had passed a bill to build such a monument, so I thought that would be a good idea for Iowa, too,” Representative Dean Fisher of Montour said in an interview.

There’s no spot picked out or even a design for the statue. The bill would leave those decisions to the state agency and the state commission that oversee the capitol grounds in Des Moines.

“I don’t envision something huge,” Fisher told Radio Iowa. “Not a huge tower or anything, something a few feet tall.”

Fisher emphasized that the bill calls for private funds to be used in designing, constructing and maintaining the monument.

“It will help people to remember and realize the loss that we’ve suffered by aborting thousands upon thousands of babies here in Iowa,” Fisher said. “Those are lives lost that could have been productive members of our society.”

The Family Leader, a Christian conservative organization, is the only group registered today in favor of the bill. The Interfaith Alliance of Iowa is registered in opposition. Connie Ryan, the group’s executive director, said the bill would set a dangerous precedent.

“I don’t understand why somebody would want to use state land to push forward their political agenda,” Ryan says.

There are nearly 50 monuments and memorials on the Iowa Capitol Grounds today.  Here’s the list.