You are here: Home / News / State of Iowa pays $4.15 million to two women who say boss harassed them 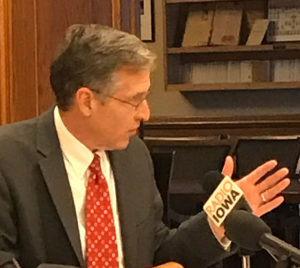 A state board has approved paying a total of $4.15 million to two female employees who say they were harassed by Iowa Finance Authority director Dave Jamison. He was fired last March.

Iowa Solicitor General Jeffrey Thompson told the State Appeal Board that settling with the two women avoids lawsuits and trials.

“In light of our own investigator’s findings that validated to a large degree the claims that were being made, we thought it was in the best interests of the state to resolve it,” Thompson said.

State Treasurer Michael Fitzgerald agreed the state could have been liable for far more if a jury had heard about Jamison’s behavior.

“The outrageousness of these two cases could lead to just tens of millions of dollars of expenses,” said Fitzgerald, one of the Appeal Board members. “This employee heading up one of our departments is disgusting.”

Governor Kim Reynolds fired Jamison shortly after the two women notified her office of Jamison’s behavior. An outside investigation confirmed Jamison’s inappropriate comments and behavior. A former employee in the Iowa Finance Authority has been awarded $2.3 million in her settlement. The other woman, who is still working in the agency, was awarded $1.8 million.

“A settlement is by far the best first step by the state to limit the loss, to respect the victims and respect the changes that leadership has tried to put in place to try to correct what was going on,” Thompson said.

State Auditor Rob Sand unsuccessfully objected to approving the settlements, arguing the documents should also go after Dave Jamision’s finances to cover at least some of the costs.

“What I’d like to see would be a signed, notarized statement of net worth and, if it ain’t $4 million, fine. Settle it for an amount that’s going to follow him around for the rest of his life,” Sand said. “…What are we actually going to do instead of just continuing to write checks to actually stop sexual harassment in public employment in Iowa?”

Sand was outvoted two-to-one as the State Appeal Board approved the settlements today.