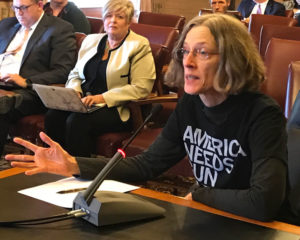 A bill to get rid of permit requirements for buying and carrying a pistol or revolver in Iowa has cleared its first hurdle in the state senate. Scott Jones, a Virginia-based lobbyist for the National Rifle Association, was in Des Moines to speak at a hearing in the capitol today.

“Self-defense situations are difficult, if not impossible to anticipate and law-abiding citizens should not be required to pay government-mandated fees and navigate a licensing system in order to exercise a fundamental individual right,” he said.

Jane Robinette of Urbandale wore a t-shirt to the hearing that the read, “America Needs Gun Safety.”

“Is a permit really such an onerous thing to be able to carry something that can kill someone else?” Robinette asked. “I’m a law-abiding citizen. I have to get a driver’s license. I haven’t had…a speeding ticket ever in my life.”

Jim Hirschberg of Lohrville argued the fee infringes on a constitutional right to protect life and property. 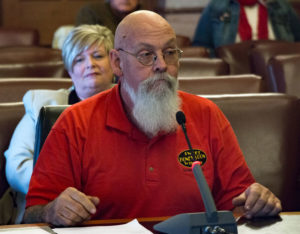 “Iowa’s permit system to carry is a hold-over from Jim Crow laws designed to discriminate,” Hirschberg said. “…What is a prevent a future legislature from raising the fee from $50 to $100 or $1000 or more? Nothing.”

Tim Coonan, a lobbyist for a group called Every Town for Gun Safety, said Iowa gun laws already are among the most permissive in the country.

“At this point in our country’s history, given all the events known and unknown, it’s hard to imagine a scenario pulling back on systems that have most likely and in many cases have been proven reduce or prevent gun violence,” Coonan said.

Two Republicans on a subcommittee voted to make the bill eligible for debate in the Senate Judiciary Committee. The Democrat on the subcommittee said he was concerned about giving Iowans considering suicide, especially veterans, quicker access to guns.