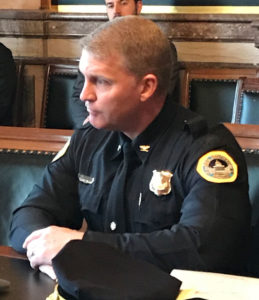 The debate over traffic enforcement cameras has been revived at the Iowa capitol. Republican Representative Jarad Klein of Keota describes a bill to completely ban cameras that generate tickets for speeding and red light violations as the starting point for this year’s discussion in the House.

“Some of these cameras are definitely useful for safety. I recognize that,”Klein said today, “but I also think there are a lot out there that are being used as a revenue-generating source and that is very problematic.”

Klein is the designated point person on this issue in the House. During a subcommittee hearing today, he urged the companies that manage the cameras and the Iowa cities that use them to come forward with ideas for regulations on where the cameras may be located and how the ticket fines may be used.

“I would rather not steamroll anybody, but we’re not beyond that either,” Klein said. “That is a way of encouraging everybody to participate in the conversation.”

Gary Grant, a lobbyist for the City of Cedar Rapids, said speed cameras have been posted along Interstate-380’s “S-curve” in Cedar Rapids because it’s too dangerous for officers to pull motorists over there.

“Mr. Chairman, we just want to say how appreciative we are that you come to this with an open mind and we’re looking forward to working with you,” Grant said.

“From a GATSO perspective overall, we would much prefer to have a regulatory framework so that we know where we stand in the state of Iowa,” St. Clair said, “as opposed to having the annual fight over whether there’s going to be a ban or not be a ban.”

The first attempt to ban the cameras came in 2011, but a bill to do that has never cleared both the House and Senate in the same year.