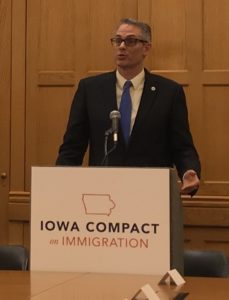 Another group of Iowa business leaders has used the Iowa capitol as the backdrop to send a message that immigrants are needed in Iowa.

The “Iowa Compact on Immigration” was unveiled today, part of a national effort to prod congress to fix the system providing guest worker visas and speed up the citizenship process for undocumented immigrants. With nearly every Iowan who can work is employed, Jay Byers of the Greater Des Moines Partnership said the state needs immigrants to grow.

“Immigrants are more than twice as likely to start a business, significantly more likely to generate intellectual property,” Byers said, “I mean, the stats speak for themselves.”

The number of international immigrants in the central Iowa area has grown at twice the national average and Byers said that’s spurred economic growth in the region.

The Iowa Business Council — representing the state’s largest employers like Casey’s General Stores and Vermeer Manufacturing — made a similar pitch at the capitol last month. Today’s event came after two members of the Iowa Senate advanced a bill to require Iowa businesses to check a federal database to confirm prospective employees are legal residents or U.S. citizens. Byers and other business leaders are lobbying against that move on the state level.

“Immigration policy should be decided at the federal level,” Byers said. “We do not need a patchwork of state laws, whether that’s E-Verify or other issues.”

As Byers was speaking to reporters in Des Moines, a group of business leaders spoke at a news conference in Cedar Rapids — delivering a similar message.