You are here: Home / News / Debate over utility charges for solar panels heads to House panel 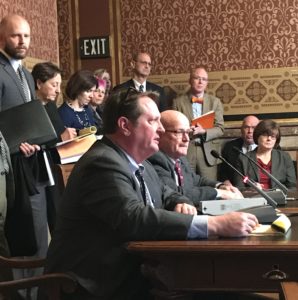 A bill that would let utilities charge a new fee to Iowans who generate electricity with solar panels on their homes or businesses has cleared its first test in the Iowa House. Julie Vande Hoef, a lobbyist for Alliant Energy, said her company supports the bill’s objective.

“When a customer uses the grid, but does not pay their share of those costs, all other customers bear that cost,” Vande Hoef said this morning during a House subcommittee meeting on the bill.

People with solar panels buy electricity from a utility when there’s no sunlight and, when they generate excess electricity, that’s sent onto the grid for other customers. J.D. Davis, a lobbyist for MidAmerican Energy, told lawmakers maintaining utility infrastructure like power lines is critical to the state.

“It is important that we preserve a cost-of-service system so that all those that are taking advantage of the infrastructure system are paying for the usage of that system,” Davis said.

Critics of the bill say the new fees will eclipse the financial benefits of installing solar panels. Josh Clark of Simpleray, a company based in Fairfield that installs solar panels, said the bill will have “very negative effects” on the firm.

“Solar is all we do, so if the solar industry in Iowa for private generation goes away, in all likelihood we go away as well,” Clark said. “…This is a career and a passion for us and we would go where the solar jobs take us rather than stay in the state to do other things.”

Paul Rekow of Spencer, a member of the Iowa Solar Energy Trade Association, has solar panels on his property.

Many in the solar industry say Iowa farmers are a growing market right now. Drew Mogler of the Iowa Pork Producers Association said raising livestock is a low-margin business, so pig farmers are always looking for ways to manage utility costs.

“Our concern with this bill is that these infrastructure charges would wipe out any economic return on putting these solar project on their farms,” Mogler said.

Other critics of the bill urged lawmakers to wait for the Iowa Utilities Board study that’s coming next year about a pilot project examining how much customers with solar panels use their local utility’s power grid.

The bill has the support of Iowa Electric Cooperatives, unions with members employed in the building and construction trades as well as some Iowa business groups. Nicole Crain of the Iowa Association of Business and Industry said energy policy is key to ensuring economic growth in the state.

“We see this as a fairness issue that will really help keep Iowa competitive…and keep businesses coming to the state,” she said, “and keep those individuals who are employed here to continue to have jobs and, for those manufacturers, to be able to expand.”

The bill cleared a House subcommittee after a 45-minute public hearing this morning. It’s now eligible for debate in the House Commerce Committee.