You are here: Home / News / Quad Cities filmmakers to premiere movie about ‘the beginning of the end’ of slavery 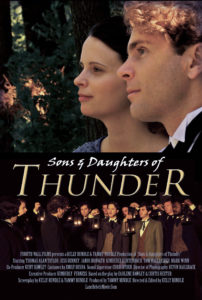 A filmmaking couple from the Quad Cities is planning for the Davenport debut of their newest movie later this month.

Kelly Rundle says he and his wife, Tammy, of Fourth Wall Films, are ready to premiere “Sons & Daughters of Thunder,” on what will be the 185th anniversary of what’s known as the Lane Seminary Debates, a turning point in American history.

“In 1834 at a seminary in Cincinnati, Ohio, the first public debates about the abolition of slavery took place,” Rundle says. “That’s significant in and of itself but it’s also significant because one of the witnesses of that event was someone who later became quite famous, a woman named Harriet Beecher Stowe.”

Years later, Stowes’ novel “Uncle Tom’s Cabin” is said to have been described by President Abraham Lincoln as the book that started the Civil War.

The Rundles’ film is based on a play written by Curtis Heeter and Earlene Hawley of Waverly, Iowa. The film features actors from Los Angeles, Chicago and the Quad Cities. Most of the filming was done in and around the Quad Cities in historic homes, churches and other buildings. Some scenes were also shot in Cincinnati in the Harriet Beecher Stowe House — the last remaining structure on what was the Lane Seminary grounds.

“We’re known more for the historical documentary films that we do but this tempted us,” Rundle says. “Although it is a narrative film, it’s a fictional telling of a true story, we felt safe in doing it because it was history.”

The film is scheduled to premiere at the National Geographic Giant Screen Theater at the Putnam Museum in Davenport on March 16th.

“Like our other films, we’ll have another number of ways to see the film later,” Rundle says. “There will be other showings. We hope for broadcast. We always release our films on DVD.”

Another screening of the film is planned for March 23rd at the Garfield Theater in Cincinnati, Ohio, where the true story took place.