You are here: Home / News / Casinos in Sioux City and Jefferson fined $20,000 by regulators for violations 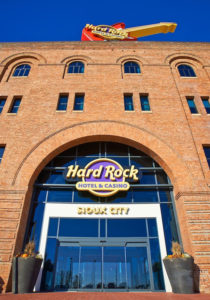 Casinos in Sioux City and Jefferson agreed to fines of $20,000 each at the Iowa Racing and Gaming Commission meeting Tuesday for violations of rules.

Iowa Racing and Gaming administrator, Brian Ohorilko, says the Hard Rock Casino in Sioux City agreed to the fine after they experienced outages in security camera coverage between December of 2017 and August of 2018. “Rules require different types of surveillance coverage for different areas. The particular situation at Hard Rock, there were multiple cameras that were down,” Ohorilko explains. “In some instances, that’s not necessarily a problem, and in other cases it could be.”

Ohorilko says the large number of outages figured into the amount of the fine along with the lag in reporting the problem. “It was a situation where it wasn’t immediately reported to the commission staff….a large part of compliance is about voluntary reporting,” he says.

Hard Rock general manager Jim Franke, apologized to the commission. “As a company we do take great pride in how train our staff to follow the rules and regulations set forth by the IRGC and to fully cooperate with IRGC and DCI personnel,” Franke say. “Actions that negatively impact the culture of compliance are not and will not be tolerated.”

He says the supervisors knew the procedures and it was frustrating to find they were not followed. “During the same period of time when the cables were causing these camera failures, we experienced three other equipment malfunctions that were all reported and addressed appropriately. We have no indication why they would, and can’t understand why these weren’t disclosed in the same manner,” Franke says.

Franke says they have taken steps to ensure the surveillance video is handled properly. He says they have hired a surveillance manager with 22 years of experience who is respected and has a good working relationship with the IRGC and the DCI. Franke says that manager has “reestablished a culture of compliance through retraining of the Iowa administrative code, IRGC rules and regulations, our system of internal controls, and our standard operating procedures.” The fine against the Hard Rock could have been as high as $25,000.

The other violation involved the Wild Rose casino in Jefferson, which was fined $20,000 for allowing a minor onto the gambling floor in November. She gambled and was on the floor for 40 minutes before staff identified her. General manager Travis Dvorak spoke to the commission.
“We take responsible gaming seriously, we take underage gaming very seriously,” according to Dvorak. “In the three-and-a-half years that we’ve been operation, we’ve had 1.6 milion admissions — and this is our first and only violation of this nature.” He says they have worked with employees to ensure this doesn’t happen again.

“We have taken this opportunity, I have readdressed and reemphasized this importance of this issue with our staff. We increased our training time for our security officers — we extended from a two week to a three-week period — and we are reemphasizing the importance of challenging our patrons when they walk in. We held meetings with our entire staff and we reemphasized the need for all employees to be diligent and observant of all potential underage patrons. We also reemphasized that is the responsibility of every employee to look for minors and to check identification,” Dvorak says.

The fines for underage gambling violations are based on the number of violations in a 365 day period, and increase with each violation