You are here: Home / News / Inslee in Iowa, touting agenda on climate change 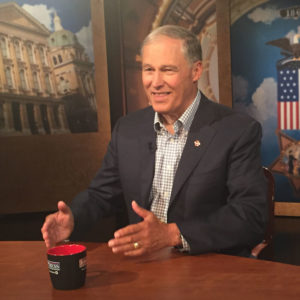 “It is time to elect a president of the United States who will say unequivocally and forcefully that we need to make defeating climate change the number one priority in the United States of America,” Inslee said last night in West Des Moines. “That’s fundamentally what I believe.”

Inslee said he’d rally the nation behind a “mission statement” like President Kennedy did when he declared the U.S. would put a man on the moon. To do that, Inslee said he’d end federal subsidies to the fossil fuel industry and promote “clean” energy sources.

“We’ve got to buckle up and get ready for the next presidential race and make sure we get someone who can make it happen,” Inslee said.

Inslee touted his background as the winner of a 1992 congressional race in a rural, Republican-leaning district in Washington state. He also mentioned co-authoring a 2007 book about clean energy and co-chairing a 21-state “Climate Alliance.”

“We have multiple challenges in our country, but we cannot solve them unless we defeat climate change,” Inslee said.

It will take money, he admitted, but Inslee argued it will cost less than increased rates of asthma or letting Miami go underwater and forests in the western U.S. burn up. Inslee made stops in Cedar Rapids, Ames and West Des Moines.

Also yesterday, two Democrats who made trips to Iowa last year have decided not to run for president. Former New York Mayor Michael Bloomberg said he’ll expand his environmental philanthropy and start a “Beyond Carbon” project. Bloomberg said the goal is to get America to a “100 percent clean energy economy.” Oregon Senator Jeff Merkley says he’s decided the senate is where he can make the greatest impact and he’ll seek reelection in 2020.