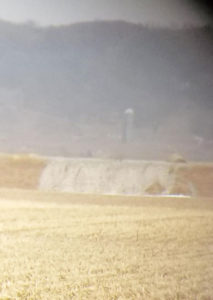 Water flows over the levee near Hornick.

All of the residents of the Woodbury County town of Hornick were evacuated this morning under a mandatory order from the mayor. Woodbury County Emergency Management coordinator, Rebecca Socknat says the water started coming into the town shortly after residents left.

“We were advised that the levee at the West Fork of the Little Sioux has been breached at about 11:20 this morning. The town was evacuated as of around noon, and their shelter is at the Westwood School in Sloan,” She says. Emergency personnel from around the county headed to the rural community to help with the evacuation.

Socknat says the roads surrounding the town were quickly covered by floodwaters and closed. “County and city roads connected to old Highway 141 have been closed at this time. New 141 will also be closed from Sloan to Smithland,” Socknat says. Much of the water from Hornick was runoff form the nearby town of Moville — which also experienced some flooding.

The Mayor of Moville declared an emergency, but Socknat says evacuations were limited. “There have been two homes evacuated — which consisted of four people and several pets. And they were rescued by boat earlier this morning,” Socknat says. She is advising everyone to stay out of the area. 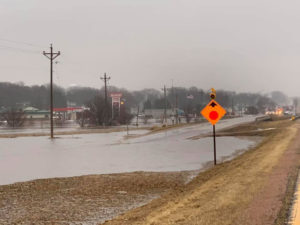 The speed of the flooding took veteran Woodbury County Engineer Mark Nahra by surprise. “In my 35 years of county engineering, I’ve never seen things go south this quickly,” Nahra. He describes the situation the led to the rapid flooding this way: “We really kind of had the perfect storm here,” Nahra says, “we had a good deal of snow already on the ground. We got two or more inches of rain over a lot of our area and with frost in the ground, nothing was percolating away, everything is running off.”

Nahra says westbound Highway 20 was closed in Moville as water is going over the road. A detour was been set up by the DOT to allow one lane of traffic each way. He cautions the public to be careful as with so many county roads in bad shape they are running out of barricades and some closings are not marked as well as they would like.