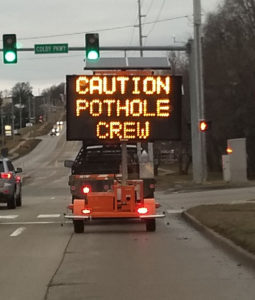 The freezing and thawing have been brutal on city streets opening up large potholes.

Iowa DOT Winter operations administrator, Craig Bargfrede says state highways have not been immune from the problem. “With the freeze and refreeze that we have seen — that has generated some pretty significant potholes in many areas across the state,” according to Bargfrede.

Water from melting snow is the culprit as the temperature drops at night and causes it to expand. “Water that gets down into the cracks and gets underneath pavement…that’s what causes the cracks and breaks and those potholes to appear out there in the pavement,” Bargfrede says. “This year especially with the amount of snow and moisture that we’ve gotten — and with the temperatures that we’ve seen — it’s just kind of compounded the problem out there.”

The potholes can be seen and sometimes avoided before they cause damage to your car. Bargfrede says another problem caused by the melting snow often is not seen until its too late. “When we’ve got these really warm temperatures with this snowpack and that melting and then we get down to those low temperatures at night — its really a situation for creating more icy, black ice situations,” he says. The black ice can cause your car to skid and go out of control.

Bargfrede says they try to get to it as soon as they can. He says they monitor the situation and then go out and treat them on a case-by-case basis. Bargfrede says potholes and black ice are not the only thing you might encounter this time of year — so he says you should always be aware of changing conditions.

“You have that fog, you have those temperatures varying up and down… they just need to be aware, don’t use your cruise control, slow down, just be patient,” Bargfrede says. And he says the rain and melting snow have caused water to cover many roadways and you should always be careful in flooding situations too.