You are here: Home / Fires/Accidents/Disasters / Plentiful potholes leading to expensive repairs for mechanics 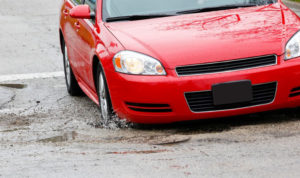 Iowa motorists, beware! That big puddle on the roadside may be hiding a massive pothole that could cost you dearly.

You’re driving along, minding your own business, and suddenly, wham! Jonna Warner, who manages an auto repair shop in central Iowa, says she’s getting a half dozen customers daily who’ve hit potholes. “We’re replacing wheels, so it’s ruining wheels, blowing tires out, misaligning the vehicle,” Warner says. “A lot of damage can occur.”

Those repairs aren’t cheap, either. “Replacing a wheel and tire combination can run $500 to $600 on some of these newer cars,” she says. And if there’s suspension damage, like to shocks, struts or tie rods, the bill can quickly bounce into the $1,000 range. Sometimes you can see the pothole coming, but you’re penned into the lane. If you can slow down quickly and safely, you might be able to just roll over it. “I’ve seen people do that and I’ve had to do that myself, trying to get over a little more so you’re not hitting it directly on,” Warner says. “There’s some that are in lanes where, if you swerve to miss it, you’re going into the other lane. If there’s a car there, it’s definitely a dangerous situation.”

You’ll know if you’ve done some damage if, after hitting a hole, the steering wheel feels wobbly or off-center, you might hear a rattle or the whole car may be shaky. Warner, who runs Freedom Tire in Des Moines, says to watch out for those stealth potholes, too. “Be careful and if it’s a pool of water on the road, typically there’s a hole underneath it,” Warner says. “A lot of people will hit them, not seeing them because they’re filled with water.”

She says some clients have tried forwarding their pothole repair bill on to the city for reimbursement, but none have had any success.