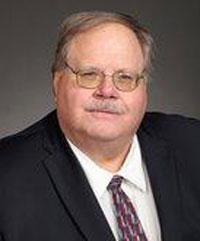 A group of state and federal officials will be in southwest Iowa this afternoon and Friday to meet with farmers and discuss flood recovery. State Representative David Sieck, a farmer from Glenwood, has lived along the Missouri River his whole life.

“I was born in ’57, but my grandpa showed me a fence line marker along the railroad that said the water got to the top of that in ’52, so basically I’ve experienced a lot of flooding in my life,” he told Radio Iowa. “Nothing to the extent that we have had in the last 10 days.”

Sieck rushed back to his farm from Des Moines after his son warned the water was going to swamp their fields.

“It was like wham, this thing started happening so fast that nobody could keep up,” said Sieck, who still had 200 acres of soybeans to harvest. “…My brother and I lost a little over 6,000 bushels of corn…with the breaches that were occurring out on the river and the over-topping, the water just came in really, really fast.”

Sieck will join Senator Chuck Grassley tomorrow as Grassley and others tour the area and hold a town hall meeting in Malvern Friday afternoon. Sieck 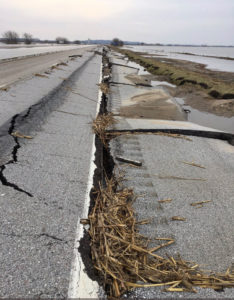 Photo by State Trooper Scott Miller on I-29 at mile marker 3 in southwest Iowa.

warns farmers in the area may lose three growing seasons, but he says there is a sliver of good news. Some grain stored in bins on farms in the areas is being scooped out.

“So that will happen quick because there’s more rain coming,” Sieck said, “especially if the bins are burst open.”

Sieck calls the problems on his farm “insignificant” compared to the devastation he’s seen elsewhere. Former Iowa Secretary of Agriculture Bill Northey — now a top U.S.D.A. official — and Iowa Ag Secretary will be at a Farm Service Agency office in Sidney this afternoon.