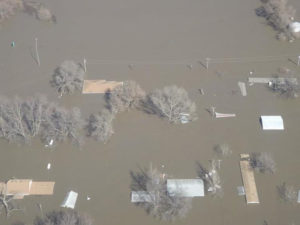 Buildings under water in Hamburg.

Floodwaters are gradually falling but residents in four southwest Iowa communities who were required to evacuate due to flooding haven’t seen their homes in about two weeks.

Matt Schoville and his family had to flee their home near Percival and have been staying at a campground outside of Sidney. Schoville says the dislocation has been devastating. “I really don’t know what we’re gonna do, it’s crazy,” Schoville says. “There’s not much to rent or to buy around this area, to even relocate for now.”

In Fremont County, part of Hamburg remains evacuated, while Percival, McPaul and Bartlett are fully evacuated. Mike Crecelius, Fremont County’s emergency management coordinator, says FEMA is helping people with losses but there’s a long recovery process ahead. “Some of our county roads aren’t even there anymore,” Crecelius says. “There was that much force with the water flowing south that we have large portions of county roads that are missing or there’s holes in them.”

Crecelius says this second major Missouri River flood within a decade is disastrous for the region. “Bartlett, in 2011, only had three to four feet of water in it,” Crecelius says, “and this time, Bartlett had water to where you could only see rooftops.” He says the river needs to drop below flood stage before communities can start to see relief.

The National Weather Service says snowmelt from South Dakota is coming down the river, and that’s one thing delaying water levels from dropping.