You are here: Home / Agriculture / Warren pledges to put some muscle into anti-trust enforcement 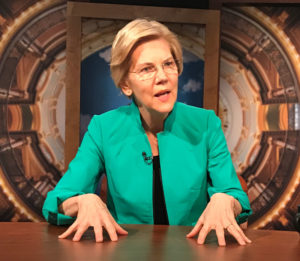 Democratic candidate Elizabeth Warren today said if she’s elected president, she would use anti-trust laws to break up what she calls “the giants” in the agricultural sector.

“We have laws to protect competition…They’ve been on the books for most than 100 years. Teddy Roosevelt used those laws to break up Standard Oil,” Warren said this morning. “The laws are there but the question is: ‘Is there anyone who’s willing to put some muscle behind it and pick those laws up and use them?’ And I’m willing to do that.”

Warren said due to massive mergers, farmers are left with fewer options for selling their grain and livestock — and fewer choices when it comes to buying seeds and farm chemicals.

“Look at the overview: the problem as I see is that Washington works great for the wealthy and the well-connected. It’s just not working for everyone else,” Warren said, “and that’s true in sector after sector.”

Warren, a U.S. Senator from Massachusetts, is among the handful of candidates who will appear tomorrow at the Heartland Forum in Storm Lake to discuss ag-related issues. During taping of the “Iowa Press” program that airs tonight on Iowa Public Television, Warren said farmers can play a key role in “fighting back” against climate change.

“Climate change is upon us and this is truly the existential threat, not just to our country but to the entire planet,” Warren said. “…I don’t have to come to Iowa to talk about the collapse of 30 levees and bridges being wiped out to drive that point home. Iowans certainly get it.”

The flooding in southwest Iowa illustrates the urgency surrounding climate change, according to Warren.