You are here: Home / Crime / Courts / State Patrol: tickets for driving and texting continue to increase 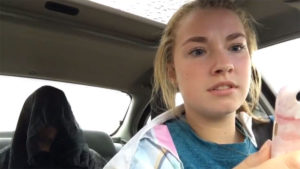 The State Patrol video shows the Grim Reaper in the car with a girl who is texting and driving.

More than 1,000 motorists got citations from the Iowa State Patrol for texting while driving last year and the numbers are still climbing.

Patrol Sergeant Nathan Ludwig says it’s now a primary offense, meaning, you can be pulled over just for texting. “I think the misconception people have is that you can still text if you’re at a red light or a stop sign and that is not the case,” Ludwig says. “If you’re on the travel portion of the roadway, you cannot be texting, writing, sending or receiving a message.”

April is National Texting and Driving Awareness Month and Ludwig has some advice to motorists when it comes to their phones. “Just have your phone out of your hand when you’re driving,” he says. “It’s better because that way, you’re not concentrating on that, you’re looking down the road, you’re seeing what’s going on. Studies show that if you glance down at your phone for five seconds at 55 miles an hour, that’s like traveling the length of a football field. You’re covering a lot of ground when you’re looking down at your phone.”

Ludwig says the patrol is educating Iowans about the continuing problem. “We’re out there every day trying to enforce the law of people having the phone out of their hands,” he says. “We’ve got a YouTube video out and our Facebook messaging, basically because it’s National Texting and Driving Awareness Month, just to get people to know the dangers of it.”