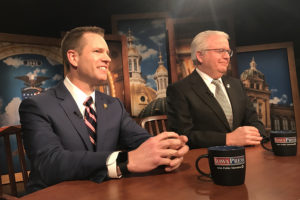 A key senator says it appears there is “one viable option” in the legislature for changing Iowa’s medical marijuana law this year.

The Iowa House has approved a measure that changes the calculation of the cap or limit on the amount of the chemical THC that’s allow in cannabis products sold in Iowa. Senate President Charles Schneider said it makes sense to measure dosages in milligrams rather than a percentage, because that’s how other medications are measured.

“When you take an Advil, the label tells you how many milligrams of ibuprofen are in that Advil,” Schneider said. “What switching this cap from a percentage to a milligram-based cap would do is more fully inform the consumer exactly what they’re putting into their bodies.”

States have been moving to expand access to cannabis products as treatment for medical conditions and a few allow marijuana for recreational use, but it is still classified as an illegal drug under federal law. Schneider, a Republican from West Des Moines, said ideally, he’d like it to be treated like any other medication.

“That, I hope, we can get to at some point, but the federal government hasn’t acted,” Schneider said. “We hear a clear outcry from our own constituents who want access to this for the different conditions that they themselves or their family members have and at the end of the day, we have to be responsive to our constituents and that’s what we’ve done with the law that we have on the books now.”

The bill that’s passed the House to change dosage measurements is eligible for debate in the Iowa Senate. Representative John Forbes, a Democrat from Urbandale, is a pharmacist who voted for the bill.

Iowans who’ve been told they only have months to live would be able to get more potent dosages of medical marijuana if the bill becomes law. It would also let physicians assistants and nurse practitioners recommend cannabis as treatment for the 10 medical conditions doctors may recommend cannabis for today.

The two legislators made their comments during a weekend appearance on the “Iowa Press” program on Iowa Public Television.