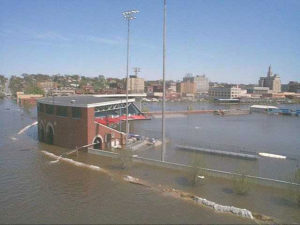 An environmental advocacy group has named the Upper Mississippi River among the nation’s “most endangered” rivers for 2019.

Brad Gordon, a spokesman for American Rivers, says the stretch of the waterway that borders Iowa, Illinois and Missouri is most threatened by levees that are being raised without the required state or federal approvals.  “Levee districts have been raising their levees illegally without getting the proper permits,” Gordon says. “They do increase flood levels so they increase risk for residents living along the river. They also isolate and destroy a lot of the habitat for fish and wildlife along the river.”

The group claims 80 miles of levees between Muscatine, Iowa, and Hamburg, Illinois, have been raised illegally which make flood heights higher and increase flooding downstream. For example, Gordon says Hannibal, Missouri, is projected to experience another foot or more of floodwaters because communities upriver have raised their levees without regard to the impacts.

“Our mindset, especially over the last century, has been to respond by making our levees and other infrastructure bigger, taller, stronger to fight these floods,” Gordon says. “There’s that lack of accountability to keep these levees from getting too high or above what they’re allowed to raise them.” He says we shouldn’t trust those levees to protect our houses or our towns. On the other side of the state, Gordon notes how the flooding Missouri River this spring has caused billions of dollars damage in southwest Iowa, Nebraska, Missouri and Kansas.

“We’re definitely experiencing it throughout the Midwest this spring,” Gordon says. “These large events that should have happened once in a generation are now happening multiple times throughout each of our lifetimes. That prediction for this basin is that those are going to happen more frequently and we’re just going to keep seeing these kinds of events.”

Gordon says levees along the Missouri River were also a critical factor in this spring’s massive flooding event that swamped several communities in southwest Iowa along with hundreds of acres of farmland. “One of the biggest quotes that I saw was over 30 levees breaches along that river,” Gordon says. “It gets to the point where we’ve come to trust it so much that these larger events are exceeding what those levees are made to protect against.”

American Rivers also names the Gila  River in New Mexico as the nation’s most endangered river of 2019, followed by the Hudson River in New York and at number-three, the Upper Mississippi River.