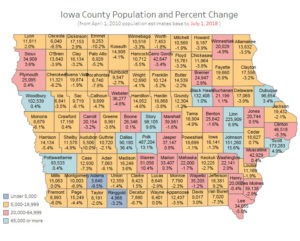 Information from the State Data Center for 2018 shows Dallas County is the eighth fastest growing county in the nation. Dallas County has grown by 36% since 2010.

State Data Center Coordinator Gary Krob, says Dallas County’s growth is part of the overall trend where the Des Moines metro area has grown by 15%.  “For Dallas County really it looks like one of their major contributors to their population is their net migration,” Krob explains.”It has more to do with domestic migration than international migration. And domestic migration can both be from people moving in from out of state, but also people moving into Dallas County from other counties within Iowa.”

While there is exact information on why people are moving within the state — Krob says the low unemployment rate and job opportunities available in larger cities is likely one reason. “When you look at the overall picture and you kind so get a sense of what’s going on and you look at the numbers — a lot of the rural decline in population isn’t necessarily people leaving the state. It’s people moving to be closer to the metropolitan or micropolitan areas,” according to Krob.

The fastest growing counties behind Dallas are Johnson at nearly 16% and Polk at 13%. More than half of the state’s population lives in one of ten counties — all of which are in a metropolitan area — including, Linn, Scott, Black Hawk, Woodbury, Story, Dubuque and Pottawattamie counties. The Iowa City and Ames metro areas were right behind the others in growth at 13.6% and 9.6%. Sixty-nine of Iowa’s 99 counties have lost population since 2010. Adams County has the smallest population in the state at 3,645.

Krob says you have to look at both the percentage and number of people who left when analyzing loses in smaller counties. “You’ve only lost 18 people, but you could decline by six or seven percent. It can present a very different picture for you. And I really think, especially for smaller communities, you need both of those numbers to get the true impact of a population loss — or even an increase — to be honest,” Krob says.

Clinton County has lost the most residents in terms of numbers since 2010 at 2,599 people. Emmett County declined at the fastest rate, losing 10.2% of its population, while Audubon County was right behind — losing 10 percent of its population. Twenty-five counties have populations below ten-thousand.