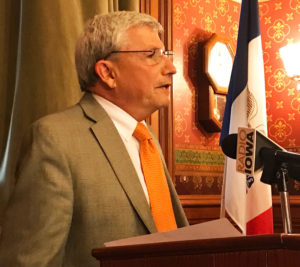 The longest-serving Republican currently in the Iowa legislature is leaving the GOP and joining the Democratic Party. Representative Andy McKean, a retired attorney, is in his 29th year as a member of the Iowa legislator.

“This has been a very difficult decision for me and has only come after considerable reflection, much prayer and many restless nights,” McKean said today.

McKean described himself a moderate who’s felt uncomfortable in today’s GOP. McKean is unwilling to support President Donald Trump’s reelection and he said that was a factor in his exit from the Republican Party

“I believe that his actions have coarsened political discourse, have resulted in unprecedented divisiveness, and have created an atmosphere that is a breeding ground for hateful rhetoric and actions,” McKean said. “Some would excuse this behavior as telling it like it is and the new normal.”

McKean intends to seek reelection to the Iowa House, as a Democrat, in 2020.

“The legislature is considerably more partisan and regimented than it used to be. I have found that difficult to adjust to and believe it often stands in the way of good legislation,” McKean said. “…In addition, I have found a very changed Republican Caucus. I have found myself increasingly uncomfortable with my party on the vast majority of high-profile issues.”

Speaker Linda Upmeyer, the top Republican in the House, said McKean’s exit from the Republican ranks “will not distract” the GOP “from moving forward with the conservative agenda that Iowans have tasked us with.” The chairman of the Iowa Republican Party said McKean had no problem riding President Trump’s “coattails” to victory in 2016 and Jeff Kaufmann, a former member of the Iowa House, accused McKean of violating the trust of voters in the Anamosa area.

The top Democrat in the Iowa House said McKean has a long history of bipartisanship and will be a “pragmatic leader and strong voice” for voters in his district while serving as a Democrat.