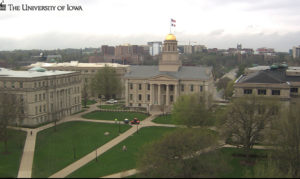 View from the Pentacrest web camera at the University of Iowa.

Under the plan, the state will provide just 60 percent of the cost for building projects at the University of Iowa and Iowa State University. Officials at those universities will have to raise the remaining 40 percent of the cost from federal grants or private sources. Republican Representative Gary Mohr of Bettendorf, a retired college administrator, said the universities can ask their 50,000 graduates for more money

“I’ve done this for 40 years,” Mohr said during House debate. “In this economy and in this world, you can raise 40 percent.”

The University of Northern Iowa would be required to raise 20 percent of the construction costs from sources other than state tax dollars. Representative Mary Mascher, a Democrat from Iowa City, said it’ll be hard to raise private donations for some vital projects, like power plants and steam tunnels.

“This has enormous ramifications to our universities in Iowa and I don’t understand why you would spring this on us at the last minute,” Mascher said.

Lawmakers are hoping to complete the work of the 2019 legislative session by this weekend.

The proposal on private fundraising for construction at the public universities is included in a budget bill that’s been approved by the Senate and the House and is headed to the governor.