You are here: Home / News / Biden says his aim is to rebuild backbone of U.S., the middle class 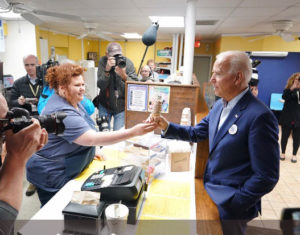 Biden’s campaign tweeted this picture of him buying ice cream in Monticello.

Former Vice President Joe Biden — the latest entrant in the 2020 presidential race — is on a two-day campaign swing through Iowa.

“Everybody knows who Donald Trump is. I want to make sure we know who we are, who I am,” Biden said. “We choose hope over fear. We choose unity over division.”

Biden spoke last night in Dubuque. At a midday rally in Cedar Rapids, he promised the crowd of about 300 he would focus as president on rebuilding the “backbone” of America.

“I think the moral obligation of our time is to rebuild the middle class,” Biden said. “That’s my north star and the reason for that is when the middle class does well, everybody does well.”

Joe Stutler of Marion said Biden’s good at focusing on issues “without being too wonky,” but Stutler hasn’t settled on a 2020 candidate.

“I’m looking forward to this campaign and the rest of the primaries to see what we end up with in February,” Stutler said.

Betty Debrower of Cedar Rapids waded through the crowd to shake Biden’s hand at the end of the event. She’s “strongly leaning” toward supporting Biden.

Biden spoke with Radio Iowa for about 10 minutes yesterday, walking into and out of the room where the interview was conducted carrying a baseball cap. The cap had the logo of the Beau Biden Foundation, the charity his late son started to “shine a light on child abuse.”  Listen to the Radio Iowa interview here.

Biden will speak at campaign rallies in Iowa City and Des Moines today.