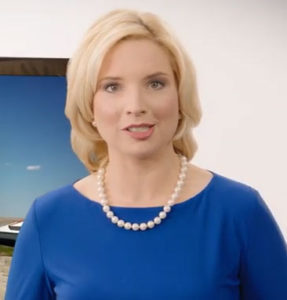 The Republican from Marion who filed her statement of candidacy Monday released a video early this morning formally announcing her campaign for Iowa’s first district congressional seat.

Ashley Hinson, serving in her second term in the Iowa House, started the video by talking about previous career as a morning anchor for a Cedar Rapids TV station. “But when I watch TV today, I’m outraged by the chaos and dysfunction I see in Washington,” Hinson said in the video. “Here’s a news flash: socialism isn’t the answer.”

Hinson hopes to win the GOP nomination and face Democratic Congressman Abby Finkenauer of Dubuque in next year’s general election. Finkenauer’s face, along with the faces of other Democrats like Bernie Sanders, Nancy Pelosi, Ilhan Omar and Alexandra Ocasio-Cortez flashed on the screen during Hinson’s announcement video.

“Iowa families don’t want to lose their employer-provided health coverage. Moms and dads don’t want more debt piled on their kids’ backs and none of us want to pay higher taxes,” Hinson said in the video.

Former Representative Rod Blum, a Republican from Dubuque, has been an active voice on Twitter, highlighting the work of the last Republican-led congress, but Blum has not indicated publicly if he intends to run for a rematch with Finkenauer in 2020.