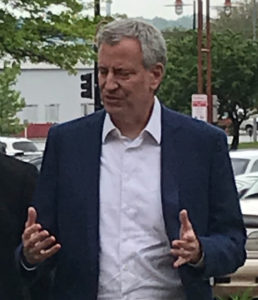 Bill de Blasio says as the mayor of New York City, he understands how to go “toe-to-toe” against President Trump.

“It’s not time to be Mr. Nice Guy,” deBlasio told a group of reporters in Des Moines early this afternoon. “It’s time to be tough and he deserves what he gets.”

DeBlasio launched his campaign for the Democratic Party’s 2020 presidential nomination yesterday. He’s in Iowa today for a series of events.

“I expect to win Iowa. I expect to win the whole thing. I wouldn’t be running if I wasn’t focused on victory,” de Blasio said. “I’ve run in 10 elections. I’ve won them all and pretty much every time, I’ve started as an underdog.”

De Blasio told reporters he plans to opt for ‘blunt’ talk about the country’s current president.

“I’m a New Yorker. I understand Donald Trump. I’ve been watching this guy for decades. I know every trick in his book…I think too often Democrats have been a little reticent to take him on toe-to-toe,” de Blasio said. “…I’m calling him ‘Con Don’ and I’m saying that phrase to make a point. I’m not falling for what this guy is about…I know how to challenge him.” 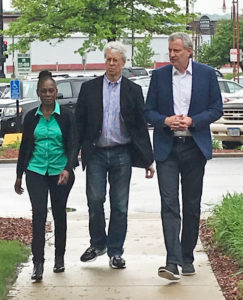 New York City Mayor Bill de Blasio, with his wife and the Mayor of Des Moines.

DeBlasio’s first stop today was at an ethanol plant in Gowrie. Early this afternoon, he met privately with a group in Des Moines to discuss their difficulties in accessing mental health care services. De Blasio told reporters in Des Moines that in a crowded field of roughly two dozen Democrats running for president, he’ll be able draw attention to his record in America’s largest city.

“We’ve done pre-K for all. We’d done paid sick days. We are doing guaranteed health care, including mental health care,” de Blasio said. “These changes are happening now for everyday people, so my view is that I’m offering solutions that are actually happening and the ability to create those solutions for people and I think that’s a real differentiator.”

According to De Blasio, that means he’s offering voters more than just “policy papers,” but an actual record of accomplishment. De Blasio, who is 58 years old, has been New York City’s major since 2014. President Trump, on Twitter, called de Blasio the “worst mayor in the history of New York City.” De Blasio told reporters Trump’s tweet means his ‘con don’ nickname got under the president’s skin.