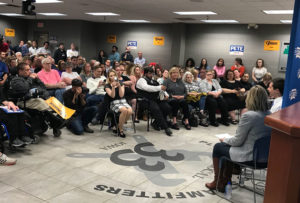 Iowa Democratic Party vice chair Andrea Phillips was reading ‘Shortest Way Home‘ by Pete Buttigieg in February when she had an idea.

“You know, I am going to read all these books anyway, why don’t I just throw it out there on Facebook and see if I can get a couple of people to read these books with me? Within 48 hours we had 150 people and, as of tonight, we’re up to 796,” Phillips said Friday evening, to cheers.

The cheers came from more than 200 of the Iowa 2020 Book Club members who were meeting at a union hall in Des Moines because Buttigieg was there to talk about the book.

“There’s even some stories in the book about my first time in this state, for political reasons, in the beginning of the 2008 race,” Buttigieg told the crowd at the start. “It’s just a real pleasure to be here and I’m looking forward to the conversation.”

Deb Henry read Buttigieg’s book on her Kindle, but brought a hardcover copy to the book club meeting — to get the author’s autograph on it.

“And I like to read and I like politics, so to me, this is entertainment,” Henry said.

Judy Diedricks had a bookmark in her copy of Buttigieg’s book.

“I am a third of the way through the book,” Diedricks said. “Got it from the library.”

She checked it out Friday morning and just a few hours later she was sitting in the front row, listening to the author. Jenny Blum,who lives near Peoria, Illinois, was in Iowa for her daughter’s college graduation the next day.

“And this was a bonus,” Blum said and her daughter nodded.

Mother and daughter read the book.

“He’s got a good vibe about him,” Jenny Blum said. “Just really like his message.”

Phillips started the Iowa 2020 Book Club March 1. The group first met with Cory Booker about his book, ‘United‘, and earlier this month Julian Castro talked with the club about his memoir.

Phillips is the moderator of the book-focused conversations. She gives the candidates a few minutes at the end of the Q-and-A to wrap things up and Buttigieg thanked book club members who bought his book because, he said, “that’s how we’re paying the bills for the wedding we just had.”

Buttigieg and his husband were married last June.