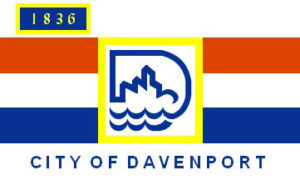 Meteorologist Tim Gross, at the Quad Cities National Weather Service office, says last week’s heavy rains in combination with more rain this week will push the Mississippi River back up in the community and it will soon approach “major flood stage” levels. “This week, we are expecting several rounds of storms,” Gross says. “Tonight, we’ll have rain come into eastern Iowa and northwestern Illinois after midnight and then some strong-to-severe storms are possible Tuesday afternoon and evening.”

The forecast is also atypically cool for this far into spring as many in the area have switched their air conditioners off and their furnaces back on, with lows in the 40s and highs only in the 50s and 60s. Gross says the rain showers won’t let up for several days. “Total rainfall through Wednesday morning, we’re expecting an inch to an inch-and-a-half of rain across our area,” Gross says, “which is going to allow the rivers to rise due to the saturated ground that we have.”

The flooding Mississippi River at Davenport set a record on May 2nd, reaching 22.7 feet. The next crest won’t be quite as high, Gross predicts, but the flooding will be prolonged. “We’re anticipating late May, the 31st, or early June for the Quad Cities area, when we’re anticipating this crest,” Gross says.

“Major flood stage in the Quad Cities is 18 feet and we’re anticipating it getting close to 18 feet.” The record crest set earlier this month beat the previous record set during the famed floods of 1993.