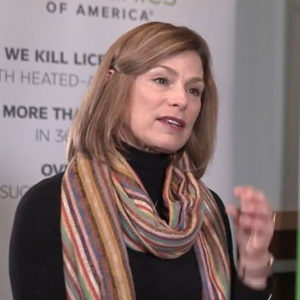 A chain of facilities that treats head lice reports an 84% increase in cases between last spring and this spring at its four outlets that offer services to Iowans.

Doctor Krista Lauer, medical director of Lice Clinics of America, says a large factor in the growing problem is that the tiny insects are highly contagious and have become a much greater problem over time. “Lice have evolved and become superlice, which means they’ve developed resistance to the traditional pesticide-containing over-the-counter treatments,” Lauer says. “They are no longer effective and people are spending time and money going to the pharmacy on these treatments that don’t work.”

In addition, Lauer says there’s a lack of understanding by the public on the life cycle of lice and how they spread.  “An adult louse will live for about a month and over that time can lay over 100 eggs,” Lauer says, “so, you can see how rapidly an infestation can escalate.” Lice, she says, only spread by direct head-to-head contact, like on the playground, while taking part in sports or at slumber parties and camp.

As the insects have evolved, she says treatments have evolved as well, touting the clinics’ use of a proprietary tool that can eradicate the problem in a single, one-hour treatment. “It uses precision-controlled heated air so it works by dehydration,” Lauer says. “It dehydrates not only the live hatched lice but also the eggs, and that’s the really hard part to kill, the eggs.”

People need to educate themselves, she says, as it’s a very misunderstood affliction. “It’s really important to know that lice have nothing to do with personal hygiene. They have nothing to do with the cleanliness of your home or your school,” Lauer says. “They are purely an infestation that happens by opportunity. Don’t panic and don’t be embarrassed or ashamed. They are so common.”

The Lice Clinics of America has offices in Dubuque, Bettendorf, Des Moines and Omaha/Council Bluffs. A spokesperson for the Iowa Department of Public Health says lice are not a reportable disease, so the state maintains no data on the number of cases.