You are here: Home / News / Up to 7 inches of rain reported in Red Oak area overnight 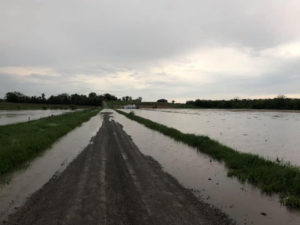 There appears to be little relief from the rain in the forecast. Crews in Davenport are erecting wider and taller barriers in the same place where a temporary flood wall was breached earlier this month.

“All of our rivers, streams, creeks, tributaries are full,” Hamman says. “Some of them are out.”

Crews started assessing the condition of roads in the county and began putting up barricades on some roads before sunrise. Hamman says the potential for flash flooding remains if there’s more rain.

“Obviously, we’ve already got a lot of rain this spring. The ground is saturated, so it’s not a good situation on our already-vulnerable roads,” Hamman says.

In Page County, a flood warning has been issued for the Nodaway River at Clarinda through Sunday afternoon. The National Weather Service said the river crested more than two feet above flood stage Friday morning.