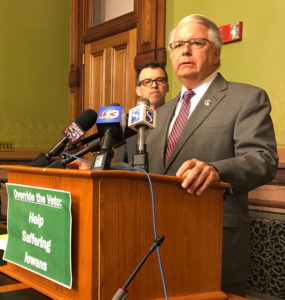 Two Democrats are urging Iowans to pressure Republican legislators to return to the Iowa Capitol and override the governor’s veto of a bill that would have expanded Iowa’s medical marijuana law.

Representative John Forbes, a Democrat from Urbandale, is a pharmacist. He said the changes would have made cannabis products more effective and more affordable.

“It’s going to take people across the whole state of Iowa contacting your legislator, telling them how important this is for people here in the state of Iowa,” Forbes said, “…Most people…probably know a person that has chronic pain and is on an opioid and this would give that patient a better option.”

A special legislative session this year is unlikely, however. Republicans control a majority of seats in the House and the Senate and Speaker Linda Upmeyer — the top Republican in the House — said “the best way forward” is to work with Republican Governor Kim Reynolds and develop a new bill that matches the recommendations of a state advisory board.

Senator Joe Bolkcom, a Democrat from Iowa City, said there’s no reason to wait ’til next year to act and it takes just 36 Republicans to join Democratic lawmakers to over-ride the governor’s veto.

“Governor Reynolds’ veto of the modest improvements to Iowa’s medical cannabis program is so heartbreaking to sick, vulnerable and, in some cases, dying Iowans,” Bolkcom said.

A few advocates of raising the THC limit on the cannabis products being sold in the five Iowa dispensaries attended the news conference Bolkcom and Forbes organized.

“You know, we consider ourselves a Christian nation,” said Bob Lewis, a business owner from Des Moines. “I don’t think it’s a Christian thing to do to make people suffer when there’s something out there that may relieve their pain.”

Lewis has serious health issues and buys more a potent cannabis patch than is allowed under Iowa law from a source he refers to as the “underground railroad.”

“I’m still working every day. I have 42 employees. I love going to work,” Lewis said. “I would not be able to go to work every day if I did not have the medication.”

2006 was the last time legislators overrode the veto of an Iowa governor. Democrats and Republicans objected to then-Governor Tom Vilsack’s rejection of a bill that set new constraints on government action to seize land for development.