You are here: Home / News / Barriers in Hamburg fortified, anticipating next round of flooding 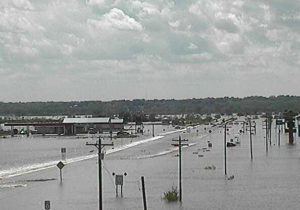 DOT traffic camera view near Sidney on I-29 Thursday afternoon.

Temporary barriers in a southwest Iowa community that have been keeping floodwater at bay have been extended.

An earthen berm was built along the western side of Hamburg after March flooding swamped the city and three feet of dirt was added to the top of the berm this week. Fremont County Emergency Management coordinator Mike Crecelius says Hesco barriers in the center of Hamburg have been fortified as well.

“Where the city had installed the first set of Hesco bags, the Corps has gone in there and reinstalled a double set of Hesco bags,” Crecelius says, “so that if the water does get into town, hopefully the Hesco bags hold up and it’ll only get that far.”

After making some progress in recovery efforts, previously flooded areas in southwest Iowa are being flooded again due to recent heavy rains. Travel in the area is dicey. Many roads that were cleared and reopened are closed again due to this new round of flooding. Crecelius says sight-seers are another concern.

“With the Hesco bags set up down there, we don’t need a bunch of traffic going through there and possibly damaging or destroying that barrier that the Corps of Engineers has set up for the city,” Crecelius says.

A new weather pattern would be welcome, according to Crecelius.

“A lot of nice warm days and a nice summer breeze would be nice right about now,” Crecelius says. “It would help some things dry out and might help evaporate a little bit of this water. Not a whole lot of it, but some of it would be evaporated for us.”

Crecelius says more than 10.5 inches of rain has fallen in the Hamburg area this month, making the flood situation even worse.