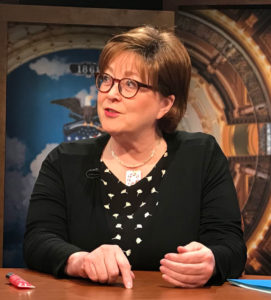 One of the nation’s leading pollsters says data from the latest “Iowa Poll” indicates Joe Biden may have an “enthusiasm deficit” compared to other candidates leading the pack at this point in the race.

“Underneath the surface, Joe Biden’s lead is a bit shaky,”  Ann Selzer said.

Selzer’s firm conducted the “Iowa Poll released last Saturday night by The Des Moines Register and CNN. It found Biden with the support of 24% of people who plan to attend the Iowa Caucuses.

“We wanted to take a look at enthusiasm for people’s first-choice candidate,” Selzer said, “and he had a lower proportion of his supporters describing themselves as extremely enthusiastic.”

Twenty-nine percent of Biden’s backers were “extremely enthusiastic,” while 43 percent of supporters of Bernie Sanders, Elizabeth Warren and Pete Buttigieg were extremely enthusiastic about their chosen candidate. Selzer’s firm also asked Iowa Caucus-goers who their first and second choice candidates were, as well as who they may be actively considering. Elizabeth Warren drew even with Biden when all three of those factors are considered.

“While Joe Biden is nominally the front-runner…he’s got a lot of shoring up to do with likely Iowa Caucus-goers,” Selzer said.

Seven percent of the people polled said Kamala Harris was their first choice among the candidates, but more than half of those surveyed indicated they’re considering supporting Harris.

There are a couple of other candidates “getting traction” in Iowa, according to Selzer.

“I think you have to look at both Beto O’Rourke and Cory Booker who are the only other candidates where a majority say that they feel favorable toward the candidate, so that’s step one is for people to know you and like you — so they’re poised to be there and they could be the candidates that came from out of nowhere,” Selzer said. “In previous caucuses we’ve had so much experience with candidates starting slow and then having a fast burn at the end.”

Selzer cited the first “Iowa Poll” of 2015, when Bernie Sanders got three percent — compared to his near tie with Hillary Clinton in the 2016 Caucuses.

Selzer made her comments during taping of “Iowa Press” which airs tonight at 7:30 on Iowa Public Television. You may watch it online here.