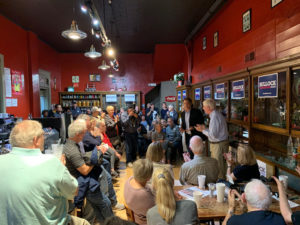 One of the Democrats who did not qualify to be among the 20 presidential candidates in nationally-televised debates tonight and tomorrow night will be campaigning in Iowa today.

Montana Governor Steve Bullock introduced himself to Iowans recently as the only Democratic presidential candidate to have won a statewide race in a state that Trump won in 2016.

“He won Montana by 20. I won Montana by four. Twenty-five to 30 percent of my voters voted for Donald Trump,” Bullock said during an interview with Radio Iowa. We have to win back some of these places we lost in 2016 if we’re going to win again.”

It’s one of Bullock’s primary pitches. He also stresses a campaign finance reform law he signed as well as an executive order that requires corporations to disclose their political donations.

“What I found in Montana is even with a legislature that’s more Republican than here in Iowa, making sure that people know who’s trying to influence elections and buy elections, I got beyond the partisanship on that,” Bullock told Radio Iowa, “and, if we can do it in Montana, we ought to be able to do it everywhere.”

Bullock entered the presidential race in mid-May, after Montana’s legislature, which meets once every two years for just 90 days, ended.

“Had I gotten in earlier, I wouldn’t have been able to get Medicaid expansion reauthorized for 100,000 Montanans…We’re the third state in the country that’s banning foreign dollars in our elections or freezing college tuition.”

Bullock supports “making college more affordable” but he opposes the idea of having the government erase student loan debt.

“I think we’ve also got to recognize that there are a whole lot of people who don’t go to college,” Bullock said, suggesting federal grants and loans should be more available for technical training in plumbing and other skills.

Unlike most of the candidates vying for the Democratic Party’s 2020 presidential nomination, Bullock does not favor a “Medicare for All” single-payer health care system. He argues it’s time to end America’s “forever war” in Afghanistan and Bullock is urging the U.S. Senate to end the “filibuster” rule which lets 41 senators block votes.

Iowa Attorney General Tom Miller has known Bullock for a dozen years, since Bullock was Montana’s attorney general, and Miller announced he’d be endorsing Bullock a couple of weeks before Bullock even got in the race.

“He’s got enormous personal qualities of integrity and doing the right thing. He’s a very bright, able guy,” Miller said during an appearance on Iowa Public Television in April. “He’s got terrific judgment. He’s sort of where I am, ideologically, which is center left.”

Miller traveled with Bullock in May during his first visit to Iowa as a candidate. By the time Bullock entered the race, 40-year-old Andy Thayer of Urbandale had seen five other candidates in person, but Thayer was willing to hear Bullock out.

“I want somebody who can beat Trump, obviously, but I like somebody with intellect and someone who can inspire,” Thayer said, “you know — someone like Obama.”

Thayer said “it’s exciting” to have two dozen Democrats running for president, but Thayer has a concern.

“I hope there aren’t too many, just in terms of the math,” Thayer told Radio Iowa, “and, you know, making it harder for any one to shine.”

Governor Bullock will be quizzed for about an hour on WHO-TV in Des Moines late this (Wednesday) afternoon. This evening, 10 other candidates will stand on a stage in Miami in the first televised debate organized by the Democratic National Committee. Bullock did not make the cut because he failed to register enough support in public opinion polls taken this spring.