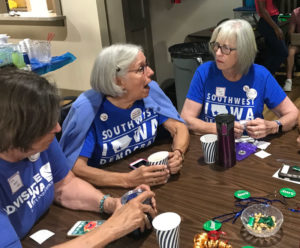 Some of the Book Club members were in Atlantic last week to hear 2020 candidate Amy Klobuchar speak.

A fifth and final book club meeting is scheduled in Red Oak today — for discussion of a 448-page publication that’s at the center of the country’s political debate.

Barb Nelson, a Democrat from Red Oak, is the organizer of club — which has been reading The Mueller Report — the special counsel’s report about Russian interference in the 2016 election.

“At every meeting we say: ‘We cannot keep it here, go share with somebody what you’re doing,'” Nelson told Radio Iowa. “Go share that you are reading this and ask them: ‘Have you read it?'”

Sarah Smith of Red Oak said every week new people have joined the group — and a few have been Republicans.

“We really had quite a robust discussion last week because we had some attendees who were very absolute about what they believed,” Smith said, “and so it was more challenging to have a good, give-and-take conversation because we were open to listening to them, but we also wanted them to hear us.”

Jan Norris of Red Oak said it makes her uncomfortable when Democrats running for president say they’re not hearing about impeachment from voters.

“We care deeply about this issue,” Norris said. “If this president isn’t called into check, we have no guardrails on our democracy.”

Some people from as far away as 50 miles have driven to attend previous book club meetings. Nelson said the group may also get together on July 17 to watch Mueller testify before congress.

“Even if all he’s going to do is read passages from the report, it could be a game-changer when it comes to waking people up and getting them to also take this report seriously,” Nelson said.

Iowa Republican Party chairman Jeff Kaufmann is not surprised Democrats are reading The Mueller Report. Kaufmann said Republicans read The Starr Report about Bill Clinton in 1998 when it was released in paperback.

“I would say it was about half and half of why they were reading it,” Kaufmann told Radio Iowa. “Part of a democracy is being informed. The other part, I mean, let’s face it — sex sells and there was a lot of that in terms of the investigative proceedures and conclusions and such.”

Kaufmann was teaching college students at the time and he felt it was inappropriate to make the Starr Report a reading assignment given some of the salacious subject matter. The U.S. House passed articles of impeachment against Clinton in 1998, but the U.S. Senate did not convict him of “high crimes and misdemeanors.”