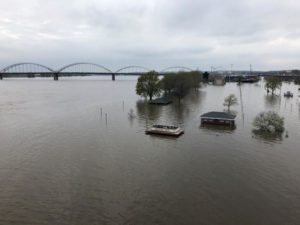 The submerged Le Claire Park in downtown Davenport in late May.

Davenport leaders are reviewing this spring’s historic floods and the city’s response. A task force made up of local officials, business leaders, scientists and residents met for the first time this week.

Many question whether Davenport should build a permanent flood wall, instead of using temporary barriers, some of which failed this spring. Mayor Frank Klipsch says that discussion will come later.

“Actually, we’re not going to talk about a wall today, or not a wall today,” Mayor Klipsch says. “There’s factors that we need to discuss and the idea is to come up with all the steps and information this group needs — and the community at large needs — to end up making a decision of what we’re going to do in the future.”

Davenport has historically prided itself on allowing some amount of flooding, in the interest of preserving the river and its floodplain. After this year’s record-breaking crests, some residents want permanent protection.

“You have records, but records can easily be broken, so not to think that the river is not ever going to get higher than certain levels,” Brooks says. “And to think about okay, what could happen 50 years from now.”

The Mississippi River at Davenport reached 22.7 feet on May 2nd, surpassing the all-time record set in 1993. Floodwaters in the city were at flood stage for 103 consecutive days, putting prolonged pressure on the roads and sewer system, which local officials called unprecedented.

(Reporting and photo thanks to Kate Payne, Iowa Public Radio)