You are here: Home / News / Truckers celebrated at the Walcott Truckers Jamboree 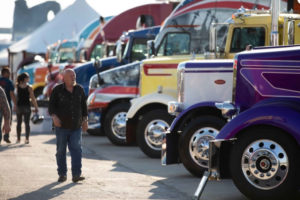 Trucks on display at the Iowa 80 Truckstop

A celebration of the American trucking industry is being held in eastern Iowa with the 40th annual Walcott Truckers Jamboree, underway at the Iowa 80 Truckstop, which boasts being the world’s largest truckstop.

Spokeswoman Heather DeBaillie says they’re expecting 45,000 visitors today through Saturday at the sprawling facility northwest of Davenport. “We have a pork chop cookout, a supertruck beauty contest which is all the latest and greatest rigs on display,” DeBaillie says. “We have an antique truck display. We have concerts every evening, a Trucker Olympics, 150 different exhibits and all kinds of fun.”

The truckstop sits on 80 acres of land with parking spaces for 900 trucks. It features eight restaurants and a convenience store, a chiropractor, a dentist, a barber, a movie theater, a trucking museum and much more. The jamboree puts the spotlight on the vital trucking industry and big rigs themselves with at least 150 antique trucks and another 100 so-called supertrucks on display.

“These rigs are decked out with chrome and lights and really cool paint schemes and their interiors are all completely redone to match,” DeBaillie says. “They’re all competing for trophies in their various classes.” A pair of century-old vehicles are being featured this year, a 1919 International and a 1919 Pierce Arrow.

DeBaillie says it’ll be a family reunion-style atmosphere, especially when it comes to the Trucker Olympics for the drivers.
“We have a tire roll competition where they have to roll a tire straight through cones,” DeBaillie says. “We have a strong man/strong woman contest where they pull a 12,000-pound cement truck. We have an obstacle course they have to run with a cup of water and not spill it.”

There’s also a pet contest, which includes best trick, best dressed and a competition to decide which animal looks the most like its owner. Find the Truckers Jamboree at the Iowa 80 Truckstop, Exit 284 on Interstate 80 in Walcott. Parking and admission are free.