After being closed twice by spring floods, the DeSoto National Wildlife Refuge is open again, hopefully for good. 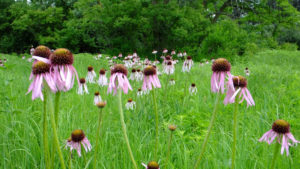 The 8,300 acre refuge in southwest Iowa was forced to put up barricades in March when the Missouri River washed in. Repairs were made and it reopened several weeks later, only to be flooded a second time.

Senior Park Ranger Peter Rea says one key area is still closed. “We haven’t been able to draw down the water enough to get our boat ramps back open,” Rea says. “It’s either bank fishing or hand-launching boats only at this time. As conditions improve, we’re going to try to get those accesses reopened as soon as we can for the public.”

Rea says the park staff has been scrambling to restore the infrastructure that was damaged by so many weeks of being underwater. “Since March until now, it’s been a battle to stay open with us being closed for a good majority of that time,” Rea says. “As the water is receding, there’s a lot of work to be done, a lot of trails to rebuild, roads to work on.”

The visitors’ center is open again but the south entrance to the refuge remains closed. The East Gravel Road is closed to vehicles but is open to foot traffic. DeSoto is one of the few parks in the area that’s been able to reopen after this spring’s record flooding.

“There’s definitely a lot to do but mainly we’re just excited to get at least some access back open to the public so that people can come and enjoy the place as well,” he says. Several other parks in the region remain closed, either due to flooding or needed repairs due to flooding, including Tom Hanafan Park and Big Lake Park in Council Bluffs.