You are here: Home / Fires/Accidents/Disasters / Completion of temporary Missouri River levee repairs not likely until 2021 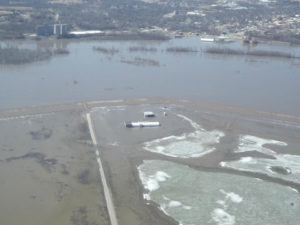 The U.S. Army Corps of Engineers estimates it will be 2021 before complete repairs are made to the 52 flood-damaged levees along the Missouri River.

“Going forward, we have 30 construction contracts that we’re looking at having awarded between now and the end of this calendar year and potentially the first part of 2020,” Budd says. Last week, the Corps announced a new process for awarding contracts on levee repairs. The new process shrinks the solicitation period to 14 days using a list of pre-qualified contractors.

The previous solicitation period was 30 days, plus a 15-day pre-solicitation announcement. Until more complete repairs are made, Budd says homeowners and property near the river remain vulnerable. “Until we get to the final fix, it’s a reminder to everyone who lives behind a levee,” said Budd. “There’s a definite risk, it’s really not totally safe at this point.” As crews continue to work on damage assessment for many sections of levee, one big hurdle remains with funding.

The Corps says it will take action from Congress to secure enough money for permanent repairs. Mills County Emergency Management Director Larry Hurst says his county has a long fight ahead. “The bigger problem is what are these structures going to look like in a year, two years, three years from now and who’s going to pay for it,” Hurst says. The latest contract awarded by the Corps was for nearly $2.8 million to further build up a levee near Percival following temporary repairs last month.