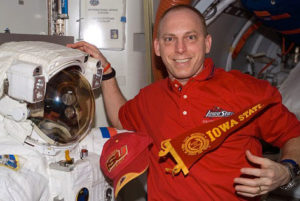 The only Iowa State University graduate to walk in space says he owes a lot to the heroes of Apollo 11, the mission that landed the first men on the Moon 50 years ago tomorrow.

Retired astronaut Clay Anderson, who was a student and teacher at ISU, says he was inspired watching coverage of the Apollo missions as a young man and knows it changed his life — and the world. “I think it established us as the preeminent space fairing nation,” said Anderson. “Depending on who you read and listen to, it also put a huge puncture in the Soviet balloon that some people think caused their society to begin to crumble a little bit. It was a big win for America, it was a big loss for the Soviet Union, and changed the course of history.”

Anderson spent more than 166 days in space on two separate missions to the International Space Station. Still, he calls the crew of Apollo 11 the “real astronauts” because of the dangers they faced in their Moon mission. “I had a pretty good understanding that I was going to come back safely and that everything was going to work well, because the shuttle had flown hundreds of times,” Anderson says. “But, these guys were getting on rockets and getting into vehicles that had barely been tested. There was a lot of uncertainty. So, I give them a lot of credit for being the real deal, in that they took a huge risk to get to the Moon and back.”

He adds, “I’m standing on their shoulders, based on the facts that they did what they did with the technology levels that were available at the time. So, I owe those guys a lot.” The 60-year-old Anderson says Neil Armstrong and Edwin “Buzz” Aldrin relied on their military and space training when alarms sounded as the lunar module attempted to land — indicating computer problems.

One of the flight controllers at Mission Control in Houston was an Iowan who saved the mission. “I would point out to the great folks of Iowa that the guy that made the call from the back room about the alarm to ignore it was Steve Bales from Iowa State University,” said Anderson. “So, all those things worked together. Neil and Buzz knew they had a bunch of people on the ground watching their backs. And for them as fighter pilots to take control was pretty much normal for them.”

Budget cuts ended the moon missions after Apollo 17 in December of 1972. Anderson, who grew up in Ashland, Nebraska, rejects critics who say the money spent on space exploration would have been better spent on Earth. “The first thing I would do is ask them to tweet that on their cell phone that they have in their hand,” he said. “And, I would remind them that when they tweet that, the satellites in space that allow them to send that tweet around the world are only there because of the space program.”

“Some of their Michael Jordan tennis shoes were designed based on the lunar astronaut boots that they wore,” Anderson says. “I would also remind the folks of Iowa that the artificial sow and the center pivot irrigation system have, in part, basics in NASA technology.”

Anderson is the author of three books about space travel. He received a master’s degree in aerospace engineering from Iowa State University in 1983. He returned to I.S.U. as a distinguished faculty fellow in 2013 to teach aerospace engineering. He’s currently living in the Houston, Texas area.