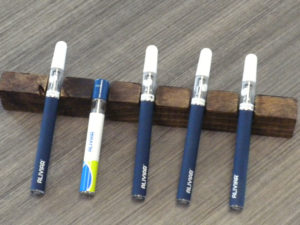 Vaping devices that will be offered by MedPharm.

The company that manufactures medical marijuana in Iowa is introducing a line of medical cannabis vapor products that will be soon be available.

MedPharm Iowa’s Lucas Nelson says this will give patients a new option. “The main focus for vaporization is that it will serve this underserved community right now of patients who are suffering from things like ulcerative colitis, chron’s Disease and stomach cancers, where they really can’t absorb any of the canabanoids through their oral digestion,” Nelson says.

He says the vaporization allows for a quicker release of product for those needing them. “Our other products will take a little bit longer to work in our patients’ bodies,” he says. “This vaporization will be released in minutes to help with pain or with some of those seizures or other symptoms that we are trying to treat.”

He says some of the people using the current pills and cremes may switch over to using the vaporized product. “What we’ve seen in other states is up to 60 percent of the population will move over to a vaporization product. I think in this state at least a quarter if not half of our patients will move to the vaporization product,” according to Nelson. “It won’t for every person of course — but for a lot of them this will be a really, really important option.” 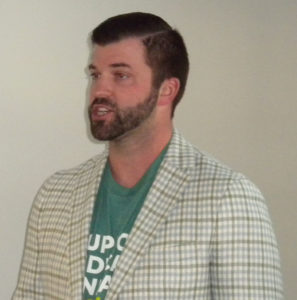 Vaping has gotten a lot of attention recently as a replacement for cigarette smoking. Nelson says the publicity vaping has received should help some in giving patients a little knowledge of how it works before they decide to try it. “I think it’ll help, I sure will still have some confusion on how it works, or is it actually working for me. But with our formulations and with the devices we’ve chosen, I think it will become quite clear to most of our patients that yes it is indeed working, and hopefully offers them a lot of relief,” Nelson says.

They plan to begin offering one CBD vapor product this month that will come in the form of a 250 milligram disposable and a 500 milligram cartridge. The second line will be available later this year and utilize THC-A along with CBD. He says another benefit of the vapor products is they will cost less compare to a monthly usage of the current products.

“The vaporization devices that we’ve released today will be under $50. The disposable will be under $30. That compares to capsules that can range from 18 all the way up to 120. And tinctures that range are around 70 or 80 and above from there,” Nelson says.

Nelson says they have been collecting data in the eight months since they began selling the medical marijuana products and are trying to adjust to what they’ve heard. “It will be another option of kind of that lower price bracket for patients that I think will address some of their needs that we’ve heard from on pricing,” Nelson says.

Nelson says they still  have to do a lot of education on the medical products. “We’ve got an extreme confusion problem between just the CBD that you can find all over the state and our program. And then you’ve got another layer of confusion between our program and the recreational programs with the one going live soon in Illinois,” Nelson says. “Again, its kind of a learning process that we have to make sure we’re doing and the state has to make sure its doing.”

The vaporization products were approved by the state. Medpharm says it has shipped 22,000 medical marijuana products to the five state dispensaries since December. The company says it has had 6,000 transactions with patients at the two dispensaries it owns in that same time.