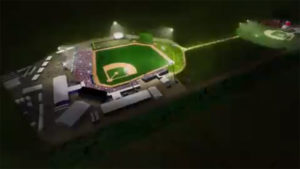 MLB depiction of what the temporary stadium will look like.

Major League baseball says it will play the first ever regular season game in Iowa at the iconic Field of Dreams site near Dyersville.

The MLB announced the White Sox and Yankees will play in a temporary 8,000 seat ballpark constructed near the site where the 1989 movie was filmed. The game is set for August 13th of 2020 at six p.m.

A statement from Commissioner Rob Manfred says: “We look forward to celebrating the movie’s enduring message of how baseball brings people together at this special cornfield in Iowa.”

The original field became tourist attraction where fans of the movie staring Kevin Costner can play catch and live out their own baseball dreams. The movie site has hosted many events through the years and a few years ago the Dyersville City Council voted to rezone the area from agricultural to commercial so a developer could build a multi-field baseball and softball complex.

Several community members challenged the rezoning arguing the city council was not impartial and the move was contrary to the city’s comprehensive plan. The case went all the way to the Iowa Supreme Court, which upheld the rezoning in 2016.