You are here: Home / News / O’Rourke says most of country ‘already there’ on key gun measures 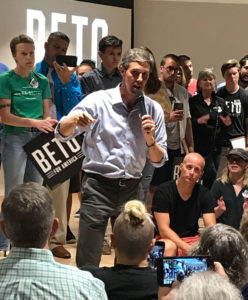 Democratic presidential candidate Beto O’Rourke tonight said his goal now is to help the country “connect the dots” and take action to curb the kind of gun violence that erupted in his hometown of El Paso this month.

“I think the surprise for many of us is that most of the country is already there,” O’Rourke said, “not just on background checks, not just on ending the sale of weapons of war, but bringing those weapons of war off the streets.”

O’Rourke returned to the Iowa campaign trail tonight, urging a crowd at Grandview University not to presume party affiliation determines views on the issue.

“I have yet to meet someone, including Republicans and gun owners, who is not concerned about the level of gun violence we have in this country,” O’Rourke said.

Valerie Madison of Des Moines plans to support another candidate in the Iowa Caucuses, but she was in the crowd tonight to hear when O’Rourke had to say about mass shootings.

“I’ve worked in preschool and I’ve said nothing is harder than consoling little four-year-olds when we’re having a lock down,” Madison said.

It was the first time Michael Thompson of Urbandale heard O’Rourke speak.

“He’s on my list, but he’s not the only one on my list,” Thompson said, adding to liked how O’Rourke expressed himself and related to the audience.

O’Rourke’s planning to travel more often beyond the states, like Iowa, that host the first voting in the Democratic Party’s presidential selection process. He’ll be in Marshalltown tomorrow to host a discussion with immigrants.