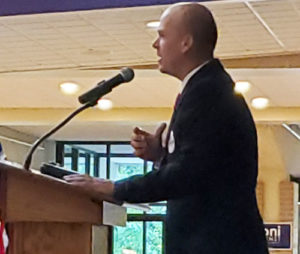 Woodbury County Supervisor Jeremy Taylor suggested Republicans can’t trust King to win the fourth district race in 2020. Taylor told the crowd he won in his home county convincingly in 2018, while King lost Woodbury County by 4000 votes along with other key counties.

“(King) lost in Webster, we lost in Boone, and we lost in many others, so that we only won by 3%, with a 70,000 voter registration advantage,” Taylor said. “And who was that victory eeked out over? The declared (Democratic) candidate right now, J.D. Scholten, who was parading around the 4th District with a baseball and Bernie Sanders.” 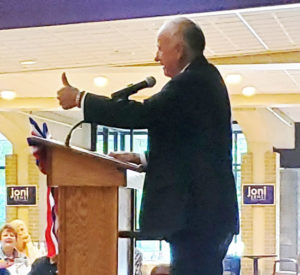 King recently sparked controversy by saying that given “all the rape and pillage” over the centuries, there might not be any population fo the world left if all the “products of rape and incest” were removed from “all the family trees.” King last night defended his call for banning all abortions, without exceptions for cases of rape or incest.

“All of you have known that whatever I have told you, you could believe and that I never equivocated,” King said. “That caused some problems, not equivocating. I never polished that up very well. I want you to know what I think because I don’t want to steal your time or your trust.” 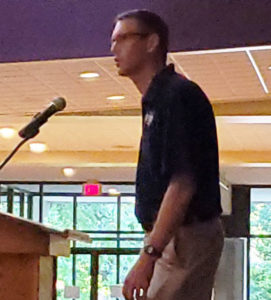 “I look at my four children. They could get hung with all this debt,” Feenstra said. “…Our economy is growing. We have to curb out spending and get balanced budgets and I will shout from the mountain tops to make that happen.”

Bret Richards, the former mayor of Irwin, touted his experience in the Army and as a businessman. He also criticized congress for its budgeting practices

“We cannot keep kicking the can down the road on the budget,” he said. “This is a serious national security matter and we don’t do anything about it.”

The fourth district candidates spoke at a joint Winnebago and Hancock County Republican Party dinner held at Waldorf University. The group spoke at a Story County fundraiser on Tuesday night and Feentra won a straw poll taken at that event in Nevada. 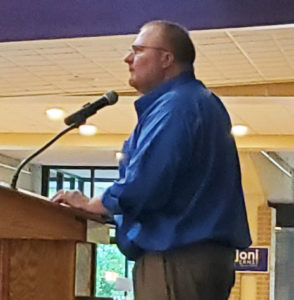