You are here: Home / News / Infrequent visitor Moulton drops out of presidential race 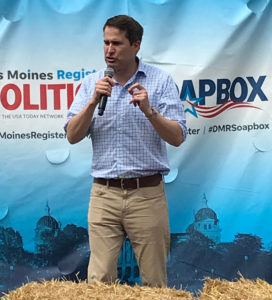 A presidential candidate who barely registered in public opinion polls has exited the race at 8:20 a.m. Iowa time today, after pledging to stay in the race just days ago and saying voters don’t care that he hasn’t met polling or fundraising criteria to be in next month’s televised debate.

Forty-year-old Seth Moulton, a Massachusetts congressman, made a couple of trips to Iowa, touting himself as an “anti-establishment” candidate with military experience.

That was part of Moulton’s pitch from The Des Moines Register’s Political Soapbox at the Iowa State Fair last Saturday. After his speech, Moulton pushed back on the idea his bottom-of-the-pack standing in the polls meant he could not win.

“I think that talking about the horse race in August, months before anyone goes to a caucus location or goes to a poll is not the best way to choose a nominee to take on Donald Trump,” Moulton said

Moulton told reporters he’d just been recognized at the urinal in a state fair restroom by a fair-goer.

Moulton, who opposed Nancy Pelosi’s election as House speaker after the 2018 election, has criticized Pelosi for standing in the way of impeachment proceedings.