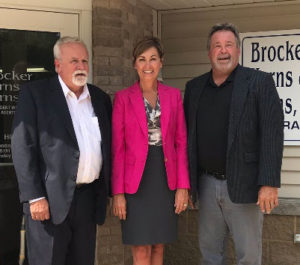 Governor Kim Reynolds says due to the natural disaster caused by hurricane Dorian, the Trump Administration’s announcement about ethanol has been delayed.

“They’re still working on a deal. We were hoping we would get an announcement this week or at least get to see it. I haven’t seen it yet,” Reynolds said Tuesday, “but I think with the hurricane they’re pushing it back a week and then, with the holiday.”

Last week President Trump promised on Twitter that his administration is coming up with a “great package” to boost ethanol. The pledge came after the uproar over 31 waivers to oil refineries, reducing the amount of ethanol that must be blended into gasoline. Iowa’s governor spoke with Vice President Mike Pence last Friday and Pence promised to raise the topic with Trump, according to Reynolds.

“I just said we need something to move timely because we’re seeing ethanol plants cut production and shut down,” Reynolds said during an  interview at an Atlantic business, “and so we don’t want to continue to see that happen.”

According to the Renewable Fuels Association, 2500 jobs have been lost in the industry as ethanol plants either shut down or cut production. An ethanol plant in northwest Iowa temporarily shut down in early August and other plants in the state have reduced output.