You are here: Home / News / GameDay showcasing the big game, the State of Iowa Saturday 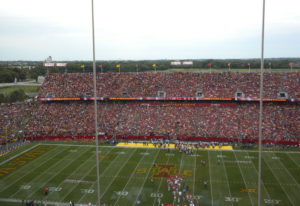 Jack Trice Stadium during the season opener with UNI.

There will be an amped-up pre-game atmosphere for this year’s Iowa-Iowa State football game. For the first time, ESPN’s College Football GameDay will broadcast from Ames on Saturday.

“GameDay, for the last 25 years, has been the traveling TV show that goes to the biggest game every week,” said Jack Whitver of Ankeny, a prominent state senator who was a starting wide receiver for the Cyclones.  “To get GameDay to come to your stadium is a big deal…It really just kind of solidifies Iowa State as an up-and-coming football program and just kind of puts them on the map.”

Each week, College GameDay features a celebrity from the host school who makes predictions about the game. Whitver suggests a former ISU quarterback he played with 15 years ago is an option.

“Seneca Wallace would probably be a top choice or Dan McCarney,” Whitver said. “He played at Iowa, coached at Iowa State, so he has ties to both schools. He really helped build the (ISU) program.”

Fans will camp out in Ames to be part of the show’s atmosphere when it goes live on ESPN at 8 a.m. Saturday. Whitver told Radio Iowa it’s an opportunity to not only showcase Iowa State head coach Matt Campbell and his football program, but the entire state of Iowa.

“You have our marque game, with both teams there,” Whitver said. “It’s going to be a really exciting day for the state.”

Some former ISU athletes playing in the NFL and the NBA have been tweeting about coming back for the big game — and the morning broadcast.

“A lot of them will come back anyway because it’s the Iowa-Iowa State game,” Whitver said, “but having GameDay there just gives them another reason to come back.”

The game kicks off in Ames at 3 p.m. Saturday.