You are here: Home / News / Wise I in Le Mars is 100th craft brewery to open in Iowa

Iowa’s newest craft brewery, located in Le Mars, will have a grand opening Friday, with the distinction of being the 100th craft brewery in Iowa.

“Having 100 breweries in the state of Iowa is a tremendous leap from five or 10 years ago. The craft brewery scene has exploded, for the better,” says Ben Sitzman, co-owner of the “Wise I” brewery in Le Mars.

He says it’s a “happy accident” that Wise I is brewery is crossing the century mark.

“We didn’t plan to be the 100th. We didn’t even know about it until three or four weeks ago, that we were in contention between two or three other breweries to be the 100th to open,” Sitzman says. “I’m excited. It actually gives me goosebumps.”

The brewery’s name is linked to an Iowan who helped draft the 18th Amendment. 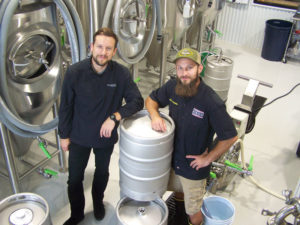 “My wife, Kristin, who is also another owner…was doing some research on Prohibition and she came across an article about a lady named Ida B. Wise and she was from Hamburg, Iowa — the president of both Iowa and national president of the Women’s Christian Temperance Union,” Sitzman says. “She was very much an advocate for prohibition, obviously the opposite side of the spectrum from what we are.”

Sitzmann’s other partner, Matt Lancaster, says they hope to educate customers about the craft beer industry.

“It’s a very collaborative industry, so it’s really cool to see it really pop up here in northwest Iowa with Brioux City, Jackson Street, Marto, us,” Lancaster says. “We know a lot of those guys and we brew with them. It’s just cool. It helps everybody.”

At 7 p.m. on Friday, the Iowa Brewers Guild is organizing a toast in all the craft breweries in Iowa to the mark the milestone of the 100th opening.