You are here: Home / News / Sanders emphasizing ‘Medicare for All’ on Iowa bus tour 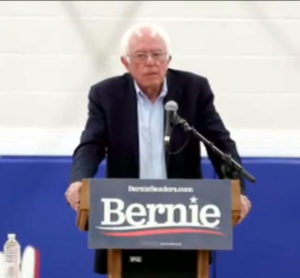 As new polling data in Iowa suggests Democrats are conflicted about having their 2020 presidential nominee run on a “Medicare for All” platform, Vermont Senator Bernie Sanders is putting the issue front-and-center as he campaigns in northern Iowa.

“We are spending twice as much per person on health care as are the people of any other country,” Sanders said at Northwood-Kensett High School this morning, “…and yet 87 million Americans are uninsured or under-insured.”

A new Des Moines Register/CNN “Iowa Poll” found 52 percent of likely Democratic Caucus-goers either oppose “Medicare for All” or support the concept, but worry it could bring defeat for Democrats in 2020. Sanders is the chief sponsor of the “Medicare for All” bill in the U.S. Senate. He told the crowd in Northwood the plan isn’t free, but tax increases will be off-set by reduced health care costs.

Sanders is also campaigning today in Decorah, Dubuque and Clinton. He held a town-hall meeting in Des Moines Sunday about bankruptcies caused by medical debts.