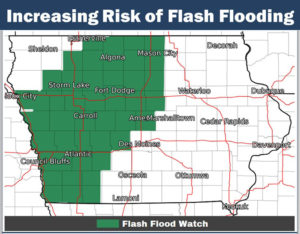 More than 40 counties across western, central and northern Iowa are under a Flash Flood Watch starting tonight and running through Wednesday.

Meteorologist Andrew Ansorge, at the National Weather Service office in Johnston, says there’s the potential for more heavy rain in areas of the state that are already soaked. “It’s just going to be the first round of moderate-to-heavy rainfall that’s going to start moving across the state tonight, across northwest Iowa, and then over the next few days, it’s just going to slowly sink southeast into central and southeast Iowa,” Ansorge says. “So, we’ll probably see an expansion of that flash flood watch in the coming days.”

Parts of the state got heavy rain over the weekend and there’s the potential for some areas to get much more.”From tonight through Wednesday morning, we’ll be looking at widespread rainfall amounts of one-to-two inches,” Ansorge says. “There’ll be areas of two-to-four inches and certainly amounts higher than four inches in the coming days.”

Forecasters say the potential for heavy rain will start this evening.  “There’s going to be a slow-moving front coming into Iowa tonight and it’ll be moving southeast and it’s going to interact with a lot of high water in the atmosphere,” Ansorge says. “All that’s going to be focused along that front and that’s when we’re going to see that moderate-to-heavy rainfall and that could lead to potential flash flooding.”

After the storms leave Iowa, he says temperatures will likely fall from highs in the 80s today down into the 50s and 60s by week’s end.