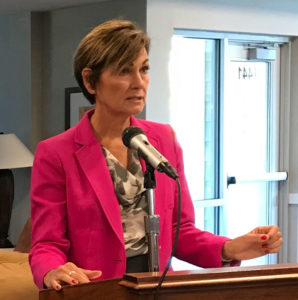 The governor has announced the State of Iowa’s last fiscal year ended with a surplus of nearly $290 million.

The state’s 12-month fiscal year ended June 30th, but the books don’t close until two months later to ensure all receipts and payments are processed. This year’s $289.3 million surplus is more than twice as large as last year’s.

“Iowa’s fiscal health is strong, and it’s a reflection of a vibrant economy as well as our ability to live within our means,” said Gov. Reynolds. “This year, we invested in important priorities like education, Future Ready Iowa, and health care so that we can be innovative, grow our workforce, and protect vulnerable Iowans. Going forward, we will continue to invest in Iowans’ priorities, but we also must be mindful of the economic headwinds in our agricultural economy and be prepared for whatever the future might hold. Fiscal responsibility and maintaining our state’s fiscal health will remain a top priority for my administration.”

(A previous version of this story incorrectly indicated the surplus triggered tax cuts. The surpluses that will trigger tax cuts will be based on FY2021 to FY2022 comparisons.)